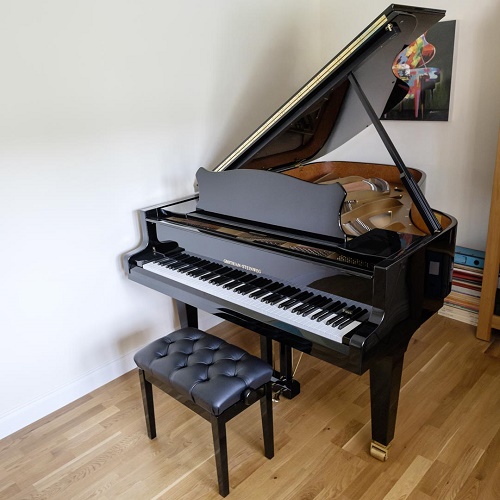 Having retired recently I decided I would take piano lessons once again (after a hiatus of about 35 years). Because my wife and I divide our time between two homes (and I had my Yamaha grand piano in one), in order to practice effectively I decided to buy an upright piano for my second home. I spent a great deal of time scouring the country, checking out various piano dealerships whilst trying out a vast range of pianos. Quite by chance, I came across Ben Wheeler’s showrooms and spent several visits evaluating the various brands he sells. Ben turned out to be highly professional but very non-salesman-like, happy to offer advice (and very good coffee) and as much time and support as needed. Frankly it was not difficult choosing his best sounding piano range – Grotrian-Steinweg! The difficult part was deciding on the most appropriate model. I eventually chose the Classic. The action was unquestionably first class, the top end crystal clear and the bass wonderfully resonant and deep. Having access to all these qualities in an upright piano is, in my view, simply unique. I had no hesitation in making my purchase. However, the story does not end there. What became painfully apparent within just a very few weeks of taking delivery of my G-S Classic was that it easily outperformed my Yamaha grand. Every time I played the Yamaha, I missed the musicality of the G-S. Clearly I could not allow this situation to continue. Hence I decided to sell my grand and buy a second Classic. However, having recounted the above story to my piano teacher, she was in no doubt that replacing a grand piano with an upright would almost certainly be an unwise move (in terms of my longer term development as a pianist). After much coffee drinking and discussion back at Ben’s showroom, I decided that my only route to long-term satisfaction would be to replace my trusty Yamaha with a better quality grand. But with what? During my many visits to Ben’s showrooms I had played literally every grand piano he had in stock, which typically comprised all the famous brands. Only one stood out ‘easily head and shoulders above all others’ a G-S Cabinet 192. I had never heard a piano sound so good. Take all the qualities so apparent in the Classic upright and then refine them further into a 1.92m grand. Pianos don’t get any better than this. Clearly I ended up spending much more than my original budget. I have a suspicion that this is a common scenario with any customer who dares to try out the G-S range of pianos in Ben’s showrooms. Hence approach with caution unless you want to hear just what G-S pianos are capable of. Any regrets? None whatsoever. Dr Nick Payne

We use cookies on our website to give you the most relevant experience by remembering your preferences and repeat visits. By clicking “Accept All”, you consent to the use of ALL the cookies. However, you may visit "Cookie Settings" to provide a controlled consent.
Cookie SettingsAccept All
Manage consent

This website uses cookies to improve your experience while you navigate through the website. Out of these, the cookies that are categorized as necessary are stored on your browser as they are essential for the working of basic functionalities of the website. We also use third-party cookies that help us analyze and understand how you use this website. These cookies will be stored in your browser only with your consent. You also have the option to opt-out of these cookies. But opting out of some of these cookies may affect your browsing experience.
Necessary Always Enabled
Necessary cookies are absolutely essential for the website to function properly. These cookies ensure basic functionalities and security features of the website, anonymously.
Functional
Functional cookies help to perform certain functionalities like sharing the content of the website on social media platforms, collect feedbacks, and other third-party features.
Performance
Performance cookies are used to understand and analyze the key performance indexes of the website which helps in delivering a better user experience for the visitors.
Analytics
Analytical cookies are used to understand how visitors interact with the website. These cookies help provide information on metrics the number of visitors, bounce rate, traffic source, etc.
Advertisement
Advertisement cookies are used to provide visitors with relevant ads and marketing campaigns. These cookies track visitors across websites and collect information to provide customized ads.
Others
Other uncategorized cookies are those that are being analyzed and have not been classified into a category as yet.
SAVE & ACCEPT